Renaming the rotary with Black statues

The first square in the park used to be called M*word-rotary. If you haven’t yet learned about its meaning in the architecture of the park, please read our contribution on the Obelisk and the Axis of Power. Here, we want to talk about the relevance of these statues today.

The name that was used for this rotary included the M*word, a term that has contributed to the history of racism in Germany. This name has been the subject of controversy. In 2014, a public debate took place on whether the city or the Foundation Prussian Palaces and Gardens should rename this rotary. Local politicians and organisations asked whether its offiicial name is appropriate today.

The M*word is indeed the oldest word used to refer to Black people in German. Experts agree that one of its roots is the Ancient Greek word “mavros” which meant “dark”. Some argue that it can be also traced back to the Greek word “moros” which meant “foolish,” “naïve,” “stupid” or “godless.” For more than four centuries, white German speakers have used this term to separate themselves from Africans. This language was part of a system that focused on difference and division rather than on a common humanity, building hierarchies between themselves and so-called “others”. 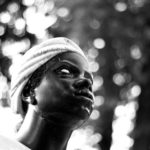 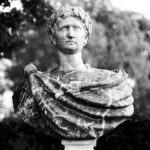 Have a look at the statues, or at the pictures if the statues are covered. The four Black figures here are arranged in a particular way: they look up to the two white busts in the middle. This establishes some kind of hierarchy between them. Besides, we can identify the two Roman figures – a philosopher and an emperor – whereas we don’t know who the four Africans are supposed to represent. They remain nameless. The black busts are here to underline “difference”, or even inferiority, to the white Romans.

Because of the underlying layers of racist history in this composition, we (and many others) have called for renaming this rotary in the books. We also wish for some kind of context for these statues. An information board should inform visitors on the meaning of this rotary in the park. It should also tell about colonialism and racism in Prussian history.

With this guided tour, we reveal how white Europeans produced and used racist thinking to justify their own position of privilege and domination. 20 metres away from here, we explain how Brandenburg-Prussia enslaved Africans and brought them by force to Berlin and Potsdam. Throughout the 17th and 18th century, white aristocrats used the M*word to call those Africans serving them. During a certain period, they were even forced to wear a turban, silver collars and earrings, accessories that were material evidence of their enslavement.

These servants have also been used as phantasmagoric symbols for the superiority of the white Europeans. In many paintings in the foundation’s collection, African servants stand behind or under Prussian aristocrats. Simon Gikandi, a scholar who studied this artistic tradition, wrote that Black bodies were used in portrays “as a mark of wealth and prestige”. They were nothing more that aesthetic props. As a result, their names were not mentioned in the titles of the artworks. The M* and N*words, however, are still omnipresent in those titles. Since 2015, Museums in Denmark and the Netherlands have started renaming artworks that had racist or discriminatory language in their titles. This decision was also taken because many titles are actually not original titles but descriptive titles given later. The name of this rotary, in fact, does not appear in the original archive from the 18th century. It might even be an invention from the 20th century.

The M*word is part of a historical context where Africans were degraded, enslaved, sold and even given as gifts. It still operates as a grim reminder of colonialism. Despite all this, the call for renaming this rotary in 2014 was strongly opposed by the city council, the media and a white majority of citizens. The local press even mocked the debate. A local newspaper suggested foolish alternative names such as “Barrack Obama rotary”.

Many places and events in Germany have the M*Word in their titles. In Augsburg, Eisenberg and Berlin, there have also been debates for renaming them and shifting the perspective on the history of those landmarks. By revealing the connections between Brandenburg-Prussia and the German colonial past, we recommend a serious and critical examination of how colonial history is remembered today. We also call for the disappearance of racist language in the urban landscape.