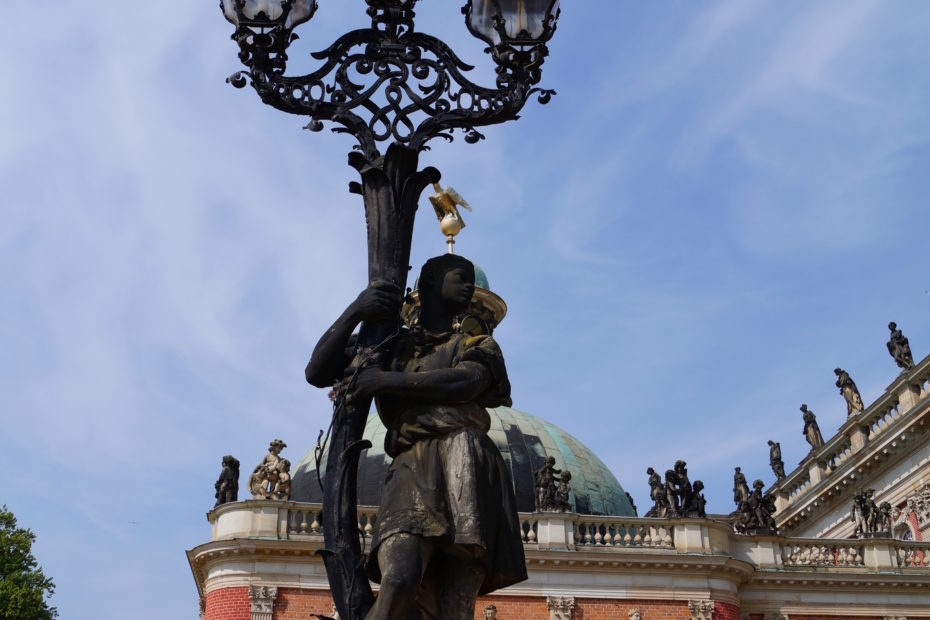 Statues of Africans in front of the New Palace

[This text contains references to colonial and sexualised violence]

Our initiative Postcolonial Potsdam was born in 2014. Back then, some of our members were part of a team organising a conference called “Postcolonial justice”. It took place at the University of Potsdam, 200m away from two statues of Africans. Scholars and authors came from far to address inequalities and discrimination resulting from colonial contexts, past and present. Some had even traveled from Australia to Potsdam. While we learnt about the effects of colonial rule all over the world, we also asked ourselves: are there places here in Potsdam that are traces of colonialism?

In front of the New Palace, facing the Park Sanssouci, there are two statues of Africans  holding lamp-posts. These were one of the first discoveries of our team. We asked ourselves: what is their purpose? Did the sculptor use any African as a model for these statues? If yes, did this person live in Potsdam? We were eager to find a hidden story behind those quiet statues.

Unfortunately, not much can be found. We know that they are part of a series of 54 sculptures decorating this terrace. The New Palace was constructed in 1769, but the terrace was added in the late 19th century by Kaiser Wilhelm II. He commissioned the Berlin sculptor Walter Schott who designed all of these statues between 1893 and 1895. They are made out of sandstone. They are inspired from the style of the sculptures on the roof and on the walls of the New Palace. The difference is that all original sculptures on the palace have stories. They are either mythological figures, gods or goddesses. They participate in Friedrich II’s self-representation of his imperial power. The terrace, instead, is more a decorative element than a symbol of power. Only a few of Walter Schott’s sculptures refer to mythology.

These statues are only remotely related to German colonialism. Walter Schott was indeed one of the personal sculptor of Kaiser Wilhelm II. He was commissioned to make busts of the Emperor that would construct his image as a powerful world leader.

Schott also made a bust of Carl Peters, the founder of German East Africa. Peters traveled in East Africa in 1884 where he forced African rulers to sign treaties that would allow Germany to govern them. Later, Carl Peters became Imperial Commissioner of the Kilimanjaro region. He oppressed local people, especially the Wachagga. In Tanzania, Peters is known as “mkono wa damu”, which means “bloody hands” in Kiswahili. When a young woman called Jagodjo fled his headquarters because Peters forced her to remains his concubine, the commissioner sent his troops to capture her and hanged her. This brutal punishment got to the ears of a renowned German MP (August Bebel) who then held a speech in the Parliament. Peters was dismissed of his function as commissioner in 1897.

Walter Schott also designed war medals, including the one given to German soldiers who fought in China in 1901 during the so-called Boxer War.