The Chinese House: an example of the Chinoiserie style of the 18th century

The Chinese Tea House is located in the gardens of the Sanssouci Palace at Potsdam. Throughout the centuries, several names were used for this house: Japanese Palace, Indian house, Chinese pagoda or temple. These various names indicate that the architecture of this building is not representative of one particular region or culture. Instead, this house embodies an exotic idea of Asia. During the 18th century the term “Indian” in German was indeed used as a synonym for “Chinese”. In baroque texts, the term India also included China and Japan, and China would also refer to Japan.

This house was built in 1754. It was commissioned by the Prussian King Friedrich II, also called Friedrich the Great. It is now considered as one of the most important monuments of the Chinoiserie, a European artistic fashion of the 18th century. European aristocracy had indeed an admiration for China. They imagined a faraway land ruled by reason and a model for taste, style and culture. But few Europeans had actually visited China or even met Chinese people. Born out of wonder and curiosity for the unknown, these assumptions were repeated in European art, architecture and literature. Friedrich II himself was a fervent admirer of the Chinoiserie fashion. He even wrote several letters and philosophical essays under a Chinese pen name. In building the teahouse, he would erect a temple for his fantasy of an idyllic China. However, nothing here has anything to do with actual Chinese art. It only conveys the imagination of its maker.

If you walk around the Chinese House, you will see groups of three figures sitting on a carpet under palm trees. The men and women wear elegant robes that are supposed to be Chinese costumes. Those were usually worn by actors in the theatre at the time: girdled garments, foreign collars, fancy hats and slim boots. Besides, the figures refer to Friedrich’s own idea of hobbies and leisure. For instance, he loved tropical fruits, which were at the time still very hard to acquire. The figures of the house eat melon, prepare a jackfruit and pluck a pineapple. Because the Prussian sculptor did not know these fruits, their dimensions are quite wrong. You can also witness people drinking tea or tofu soup, but also falconry. In the 18th century, goods such as tea were refined products, rare and therefore costly in Europe.

Near the outer walls of the tea house, twelve figures are supposed to represent Chinese musicians. They hold modified versions of well-known string instruments and horns. Friedrich the Great himself played the flute and composed music. It is not surprising then that music should be part of his exoticizing representation of the pleasures of life. China is here portrayed as a secular garden of paradise where the golden years of abundance have begun. The gilded layer that covers these figures also represents wealth: until the mid 18th century, gold was indeed exclusively restricted to angels in churches. 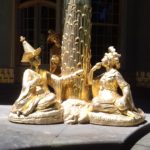 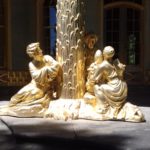 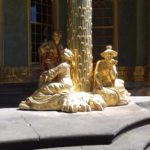 Statues drinking soup at the base of a column (Photo: Y. LeGall) 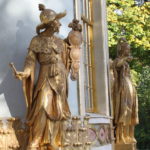 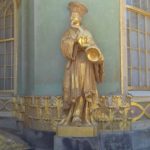 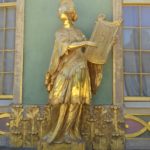 While the exoticized image of China may sound positive like an expression of admiration, it is still inherently racist. The tea house is an aestheticized version of China. It constructs China as ‘other’. Only non-white people and regions are perceived as exotic. Etymologically, the work ‘exotic’ means ‘foreign’ or ‘alien’. The word became part of the German language during colonialism.

This house and its history offer insights into colonial practices here in Potsdam. Friedrich the Great did not have any interest in colonial expansion abroad. But his friendship with the Kingdoms of Holland and Denmark, and the protection that he granted to the Emden East-Asian Company, allowed Brandenburg to participate in an international trade that facilitated colonial aspirations of other European powers.

Today, the Chinese house is still a major attraction. The exoticization of China still continues.

Any cookies that may not be particularly necessary for the website to function and is used specifically to collect user personal data via analytics, ads, other embedded contents are termed as non-necessary cookies. It is mandatory to procure user consent prior to running these cookies on your website.